Since moving to Edinburgh in September, I haven’t seen my mom. We decided to have a little New Years meet up, but since Edinburgh is quite cold, she wouldn’t meet me there. We ended up in the much sunnier Lisbon. Lisbon also turned out to be quite a haven for specialty coffee. Though it isn’t extremely vegan friendly, it does have a few really great independent coffee shop offering vegan options, and they did have a plant-based milk option pretty much everywhere, as well as some food that could be veganized, if it wasn’t vegan already (I had quite a few avocado mashes). Since we basically spent half of our trip coffee-shop hopping, I will share with you my favorite spots (where they also had more than one vegan option).

I saw Comoba was one of the most recommended specialty coffees in Lisbon when I was doing some research prior to my trip, and though I knew that, somehow me and my mom just accidentally stumbled upon it when we were looking to grab some lunch. We ended up in Comoba without even realizing how vegan friendly it was! There were so many vegan options on the menu that it was literally impossible to choose. Comoba offers nice sweet breakfasts, such as apple cinnamon porridge (which my mom loved), vegan pancakes, chia pudding and a sweet peanut butter vegan toast. There are also savory options, such as a burrito or an egg bowl, that have a vegan (tempeh) option. There are also “actual” food options, such as a quinoa bowl (delish), a jack fruit sandwich and a vegan burger. And if I haven’t convinced you just yet that this is a vegan paradise, they also have vegan cake options (that change daily), as well as some fancy, colorful, lattes, and at least 4 different plant-based milk options. Oh, and their coffee is great too!

The place itself has a chic modern look to it. The only traditional elements are big white arcs. Other than that, Comoba has a long counter in the center of the room, large white lamps hanging from the ceiling as well as some florescent lights, and the entire color palette is grey and white, with marble-like white tables and some wooden tables, and an exposed cement floor. You can either get a bar seat, a regular table, or some cozier options alongside a long bench, padded with pillows. There is also quite a lot of greenery going around.

The staff was super friendly and helpful and the service was great (as in most coffee shops in Lisbon you get a full service, so no need to order at the counter), and though the space is quite large, and doesn’t have the homiest decor, we felt very much at home. This is definitely a must visit when in Lisbon, and it is also located conveniently in the center of this bustling city, in the lovely Barrio Alto neighborhood.

Formerly known as Cafe de Finca, Selva is located in the lightly more remote Alcantara neighborhood, but it is very much worth a visit! I think Selva is probably my top pick for this trip. In a way, Selva is the most casual coffee shop I have been to in Lisbon, but not at all in a bad way. The decor is quite simple, with wooden tables, and a wooden counter, and there are numerous plants all around. The layout of the place is quite interesting, as you need to walk down quite a few steps right when you enter the room, and there are also more seating options on the second floor, so it’s essentially a big space. And though everything is pretty and aesthetic, nothing about the decor is fancy. Maybe Hipster is the word I am looking for…

Though the decor of the place is quite simple, everything was beautifully served. As we went to Selva on a Sunday, and they had a vegan brunch set menu option. Though I didn’t get it, it offered some vegan granola, a vegan avo toast, vegan cake and a smoothie, and it seemed amazing. Instead I had an acai bowl that was to die for. I haven’t had such amazing acai since I visited Brazil! There also had a brownie as well as an almond cake, which in my book makes it a perfect spot for either breakfast of a snack and coffee. The coffee was delicious as well.

If you are considering visiting Selva, you might want to check out the LX Factory, which is really close by, and is a true arts haven. 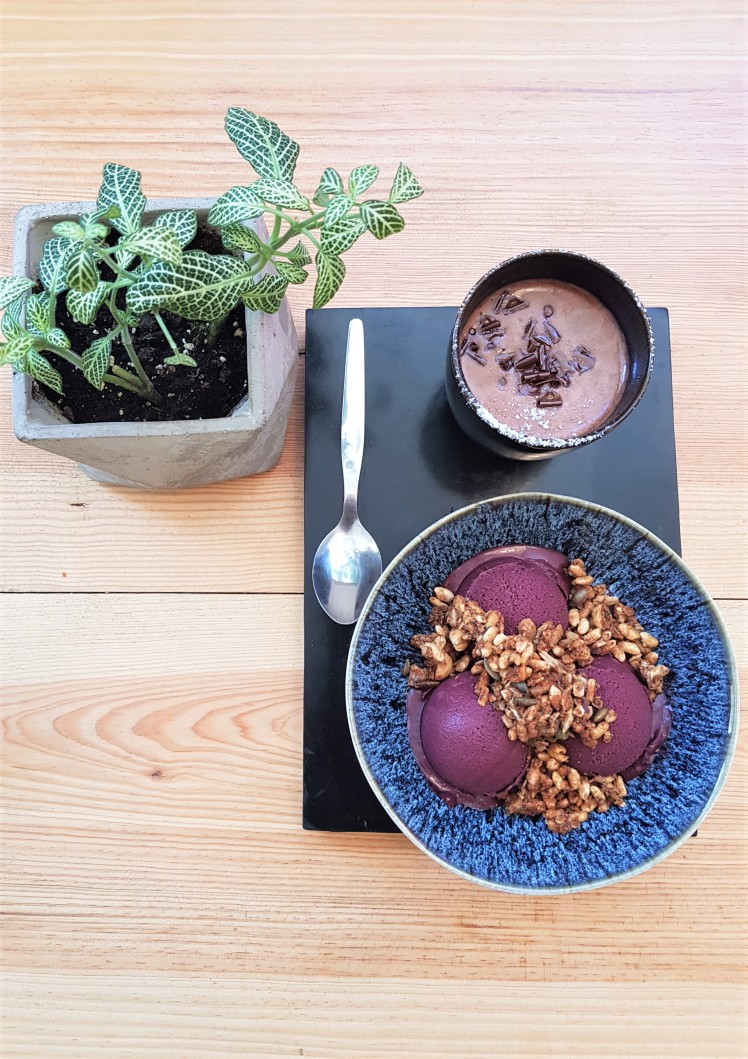 Opening its doors almost a year ago, Milkees is a little new gem in town. Located right near Parque Eduardo VII, Milkees is a cookie lovers’ paradise, voted “the best cookies in Lisbon”. Fortunately for us vegans, they also offer a double chocolate vegan cookie option!

The decor of the space is quite a modern, minimalist-Scandinavian one, but it has a warm feeling to it, with lots of wood all around – from a light wooden bar to wooden walls. There are even wood toned couches and tables, as well as quite a few plants around. The entire place has a light palette, and has a cozy, slightly industrial chic to it and neighborly vibes.

On top of their delicious cookies, Milkees offer a good third wave coffee with plant-based milk options. The menu also has some other vegan options, such as acai bowls, as well as pita bread with hummus, and more.

Note that if you are visiting, the place is closed on Thursdays and Fridays.

Stay tuned for my next post about the best places for bowls and coffee (with vegan options) in Lisbon.