For those of you who aren’t familiar with the ketogenic diet, very simplistically, it’s a very low carb and very high fat diet, which aims to “force” the body burn fat for fuel instead of rely on carbs as a source of energy (that is a state of ketosis). Since you eat almost no carbs (5% of your food intake) in keto, you trick your body into thinking you are fasting, which results in the body starting to burn off fat, while actually eating at least the same amount of calories. Since there are no insulin spikes in keto (which are sugar related) you are actually supposed to feel less hungry. Other advantages of keto (except for weight loss) are mood regulation (it helps with anxiety, depression and ADHD, which is also aggravated by sugar intake), some hormonal irregularities, reducing inflammatory factors in the body, as well as clearing acne.
I first started playing with the idea of going on a keto diet when my best friend tried it, and reported it did wonders for her. At the time, I was having arthritis-like symptoms (which I wrote about in this post). I felt like this might help with reducing the symptoms. However, as my life was crazy back then (getting my ballet students ready for recitals, as well as getting ready to move to a different country), I decided to postpone it. I knew that when you go on a keto diet the body has an adjustment phase. This phase usually includes feeling quite fatigued and flu-like. It also takes preparation, as it is a very specific diet, you can’t really eat out and you need to be cooking a lot. I felt like my lifestyle couldn’t support the transition, and decided I would try it once I move to Edinburgh and got settled. That is exactly what I did.
The preparation phase:
I was quite anxious about starting my keto diet. I didn’t know how bad I would feel and how well I would cope, and as my schedule was still pretty tight and involved physical activity, that was a challenge. That led to the fact I couldn’t decided when I wanted to start. I basically decided the day before that as of tomorrow I will be doing keto. This helped with not having too much of a build up and anticipatory jitters. But as it does take some preparation, that evening I went to buy groceries and ended up buying quite a lot. The main things you can eat in keto are green vegetables and fatty stuff. I packed the house with leafy things, avocados, coconut cream, tahini, peanut butter, nuts and seeds and Stevia, as a sugar substitute. I also looked up a few recipes in order to get some ideas as to what I might be eating, and how to get creative. I prepared myself chia pudding for the next morning (which was my first day of keto) and went to sleep. The next day I woke up, had my pudding, went to school, and when I returned back home started cooking for my keto diet…
Things you need to know about keto:
Keto diet consist of a daily intake of 70-75% fat, 20-25% protein and 5% carbs. Almost everything has carbs in it, so you need to look at net carbs – you deduce the number of carbs that come from fibers from the total number of carbs in a given product. You can have up to 15-20g of net carbs per day, otherwise that’s too much carbs and that will get you out of ketosis.
This actually means that a lot of nuts, seeds etc, aren’t ideal for keto, and you need to track your total number of net carbs. Flax seeds and pecans are the most keto friendly ones. This goes also for peanut butter, plant based milk etc. You need to start checking labels. There is also great variability between different brands. That is obviously true when it comes to processed foods, but it’s true even for the less processed ones (like cocoa nibs, for instance).
What I ate:
For breakfast I had either a chia pudding or some sort of a smoothie. I ate a lot of very fatty coconut yogurt, coconut cream, coconut and almond (but not rice-almond!) milk. I sometimes added berries, which are pretty good for keto, although you can only have a few of them. I had a lot of green salads (spinach, lettuce, and arugula (but not kale) are really good for keto) with mushrooms, avocado, seeds and nuts, tahini, tofu (which is a good source for protein). I got an avocado vegan mayo and coconut vegan butter spread. I baked breads and tortillas from almond, coconut and flax meal. I cooked and roasted vegetables, with the best ones for keto being broccoli, cauliflower, asparagus and zucchini. I had some zoodles, made peanut butter sauce, coconut cream sauce. Very dark chocolate (90%+) with/without added sugar is also ok in small amounts, so that allowed me to bake, and make keto Bounty snacks. 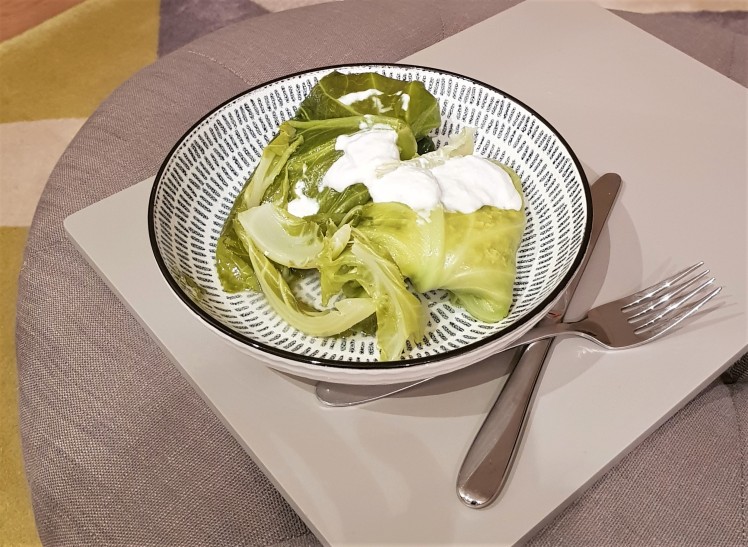 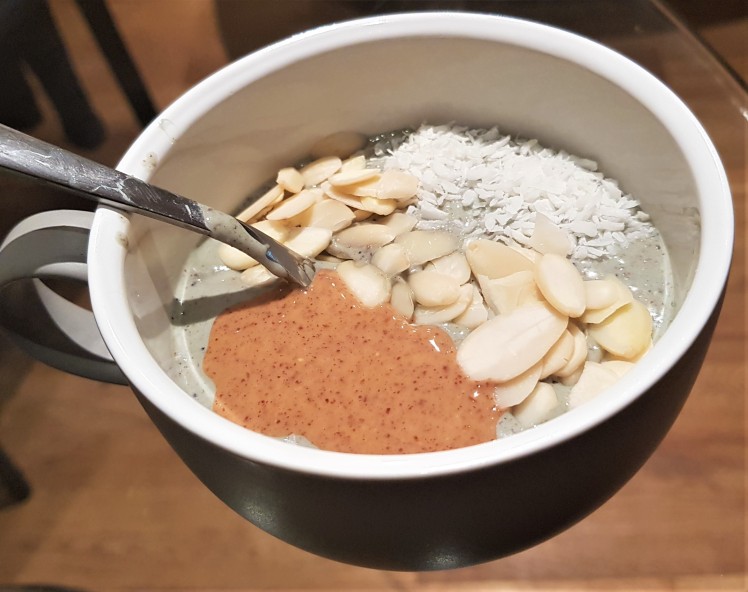 How I felt:
I couldn’t feel a thing for the first two or three days and I was starting to think that this had no effect on my body whatsoever, or that I wasn’t doing it right. However, on the third day I started feeling the effects of keto. I became sick after having my breakfast. Even drinking water made me feel so full, I started eating less and stopped being hungry. I kept feeling nauseated for 2-3 days.
After two days I became slightly constipated. However after about a week that changed, and I was suffering from diarrhea pretty much all the time.
As for my energy levels – I was sleeping a lot more! I was having trouble to fall asleep for a few days, but at no point did I have an energy rush, or couldn’t sleep through an entire night, like some people describe happens to them on a ketogenic diet. My energy levels were very low! My blood pressure dropped (it is always low, but on keto it became alarmingly low). I had no energy in my muscles and had a lot of cramping going on. I also felt short of breath quite a lot.
I did loose weight, and I did loose some fat in my belly and around my waist. However, this is where I normally loose weight from anyway, so it’s hard to tell how keto related that was. I should note that this might have also been the problem with my diet – I am very skinny to begin with, and my percentage of body fat is really low, so I had to eat a lot, but since I felt to sick, I couldn’t really do that. I lost too much weight, and couldn’t eat as much fat as I should have, which made this unsustainable for my body.
Two benefits from keto were the fact that my skin had cleared out and looked much better. I also think my joints hurt less when I was doing keto, and I might have been more flexible too.
A less physically related pro was that as the dies is so limited and limiting, I became super creative with my cooking, and got excited about new recipes, something that hadn’t happened in a while, and that made me happy.
All in all, I wouldn’t recommend it, unless you really need to go on a keto diet!
One more problem was coming out of it. My body reacted real badly, I felt super sick and had withdrawal like symptoms – I was shaking, had cramps, head aches, I was dizzy, nauseated, hat heat flashes…  Also, I was hungry all the time!
As I am only a few days post keto, I don’t know how it might have effected my metabolism. I feel like I experimented with my body, and not in a good way. I feel like it was and still is under a lot of stress, and still waiting to see what happens. Honestly, I’m just waiting for everything to go back to normal.
Till next time,
~Lir