After leaving Aruba I took a little detour and instead of returning back home, I flew to Warsaw (Poland). After three weeks in the Caribbeans and having either a smoothie bowl or chia pudding every single morning, I was craving my bowls. When I landed in the city and started looking for vegan options, I realized that I might be able to fulfill my wishes, as Warsaw turned out to have numerous vegan or vegan friendly restaurants and cafes (which I will tell you more about in my next post). I was extremely excited when I googled smoothie bowls and found an adorable looking place about 5 blocks away from my Airbnb. However, my first attempt fell flat, as it turned out the place had close last month, and was now a (super cute) coffee shop. (Just so you don’t repeat my mistake, Press Juice People no longer exists…)

After that I contemplated having a smoothie bowl in some other vegan restaurant that doesn’t necessarily specialize in smoothies, as I have seen them on a few menus in places I have visited. But though I tried to be okay with that, I couldn’t order those smoothie bowls and on the other hand couldn’t let go. At some point I was randomly looking at my Instagram feed, and I ran into a place called “Coco Bowls“. All their smoothies seemed delicious and the place itself looked real cute. I decided to go check it out.

I hopped on a bus first thing in the morning, and after three stops I found myself in the middle of a park (Warsaw is so incredibly green!). I started walking in the direction google maps told me to and started to get slightly worried, I was in a very quiet residential area, and had to keep walking straight to what seemed like the end of the road. I kept walking and when google maps claimed I had reached my destination, I found myself in front of a fancy looking building, surrounded by a gate. I was baffled for about 30 seconds, until a young guy with long hair that was holding a big box of fruit smiled at me and opened the gate. Only then I noticed the gate had a sign saying Coco Bowls on it.

Once I entered, the space was very inviting, with dark wooden furniture and bar, a lot of hanging plants and earth toned tiles, which contributed to the warm ambiance. There were shelves with coconut bowls and snacks (such as granola, dried fruit and nut butter) you could purchase.

After looking around (and taking some photos) I finally got to the menu, and had a really heard time choosing what to get, since there are so many options, and all of them sound delicious. You can choose a smoothie, and nice cream bowl, a granola bowl or chia pudding. Each section has various options, and some are pretty creative and interesting (like ocean chia bowl, which is chia pudding with blue spirulina). Coco Bowls also serve a variety of special lattes and sweets like brownies and cheesecake (all 100% vegan). I ended up getting the peanut butter power bowl, which is basically a peanut butter flavored nice cream bowl with granola, coconut chops, cocoa nibs and bananas on to[. It was so good, that I was really upset about the fact I couldn’t get more of it or try other options, as it was a very generous portion and I was full after finishing  (most of) it.

I set in Coco Bowls for about an hour, and got to see quite a lot of people, getting super colorful bowls and smoothies. The atmosphere was nice and I felt welcome to stay for as long as I wanted. Other people arrived with friends and hang out in the space, and the staff were friendly and chill throughout the entire time. I felt as if the place really exudes good vibes 🙂 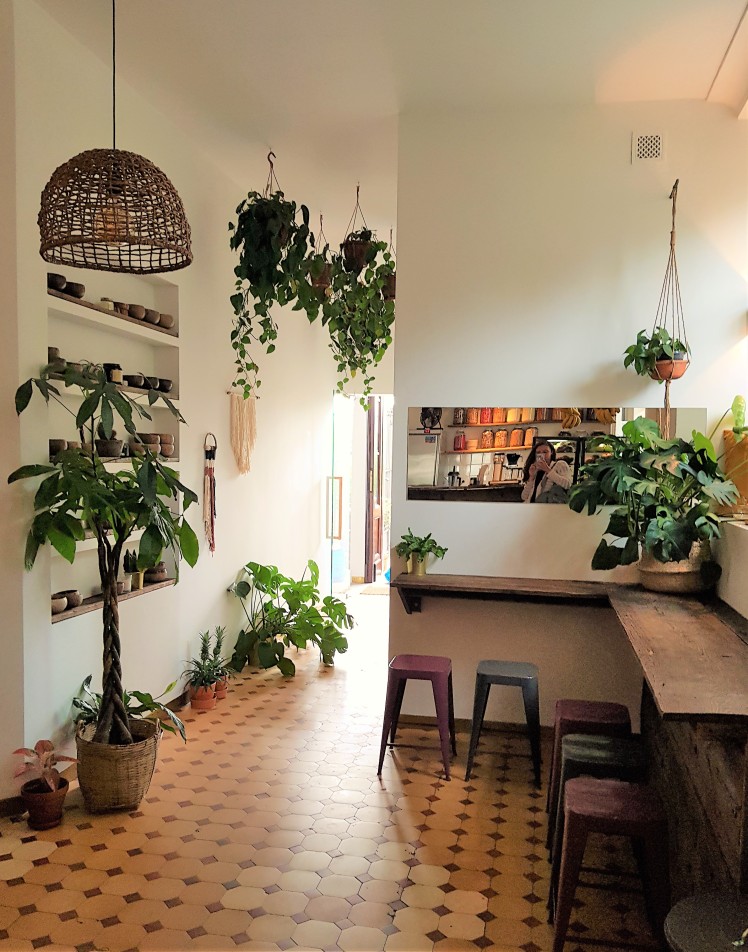