As I told you in one of my previous posts, Starbucks didn’t make it in Israel. Actually non of the American or European chains (besides a few years in which “The Coffee Bean” thrived) made it in Israel. That means we have no Starbucks, Costa, or even Dunkin’ Donuts. This might be a shocking fact, and at this point you might be wondering what do Israeli’s do if they need a quick fix, or a go to place they know is available (almost) wherever they go. The answer is that our local chains were able to fill in the void. Since some are actually worth while, I decided to debrief you and offer a few tips.

Before I do that, I think I should point out that part of the reason Starbucks failed in Israel is because the Israeli coffee culture is very different than the American one. When Israelis go to a coffee shop they expect an entire experience, they do obviously sometimes just want coffee to go, but they prefer sitting and having their coffee with a proper breakfast or lunch. This puts a lot of emphasis on the food, and less so on the coffee itself. Most chains in Israel, and 3 out of 4 I will describe here, have a very rich menu, and they barely offer pre-made sandwiches or snacks (obviously they do have pastries, but that’s about it).

Aroma is probably the most popular coffee chain in Israel. Aroma started out as a single company, but after a family dispute, it split into Aroma Tel-Aviv and Aroma Israel. Though there are some similarities in the concept, design and menu, there are also differences. To point out one, if I had been writing this post a couple of months ago, Aroma Tel-Aviv served almond milk, whereas Aroma Israel didn’t, however this problem was recently solved 😉 The bottom line, however, remains, Aroma Tel-Aviv turns to the Tel-Avivian crowd which is slightly more health aware and vegan friendly. You will find Aroma basically everywhere – at the airport, in malls, gas stations along the highway, main streets… You can even find Aroma in the states, Canada, the Ukraine and Kazakhstan.

Aroma doesn’t offer very sophisticated food, but it offers many breakfast options, sandwiches, salads and soups. The products are fresh, portions are generous, they serve really fluffy bread, and all in all their meals are satisfying. Their coffee isn’t the best, but it’s definitely acceptable, and will give you that caffeine shot you’ve been craving.

In all of Aroma’s locations you will have to order over the counter, and there is no service at all (pretty much like Starbucks). The biggest advantage of Aroma is the fact that it is so available. It is also a great work space, and a place where you can spend long hours without anyone bothering you. It’s definitely not the most intimate place, but some locations are actually rather cute and cozy.

Note that some of the Aroma Tel-Aviv locations are kosher, and don’t serve meat at all (only vegetarian and pescetarian options). 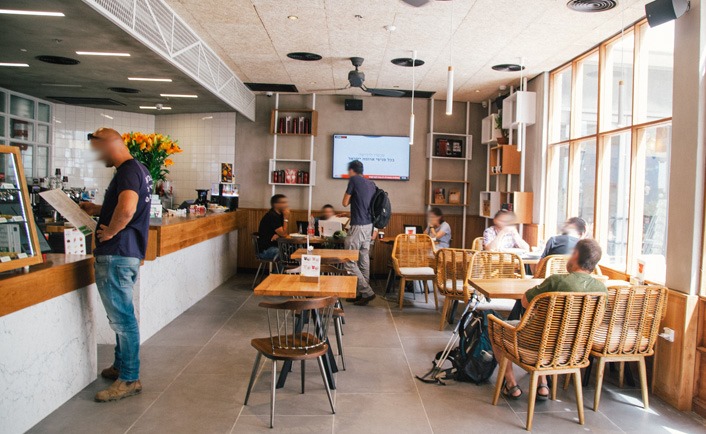 Landwer is probably my favorite coffee chain in Israel. The coffee is good, the food is delicious and super vegan friendly, and though it’s a chain it has a very homey vibe to it with a retro chic decor, and a dinners’ vibes touch.

Like Aroma, Landwer has spread its wings and found home outside of Israel – both in the sates and in Canada. Unlike Aroma, Landwer doesn’t really feel like a big chain. It is slightly less popular than Aroma, but there are still numerous locations, and you can find it in many main areas in Tel-Aviv, from north to south, as well as outside of Tel-Aviv.

Landwer has a rich menu, more restaurant like than coffee shop like, and has full service. This means you can have there a lunch or a dinner if you wish. They also have a special vegan section on the menu, offering breakfasts, sandwiches and casseroles. I would recommend their Buckwheat casserole. Another treat is their signature dish (dessert) – the Rozalach, which is some sort of a yeast, olive oil based pastry, filled with either lotus spread or Nutella spread (vegan as well).

Like Aroma, the menu in Tel-Aviv is different from the menu outside of the city. Moreover, some locations are Kosher, which effects both the menu and opening hours. Most location are open daily till 11pm-12pm. The Rothschild Boulevard is actually open 24/7. 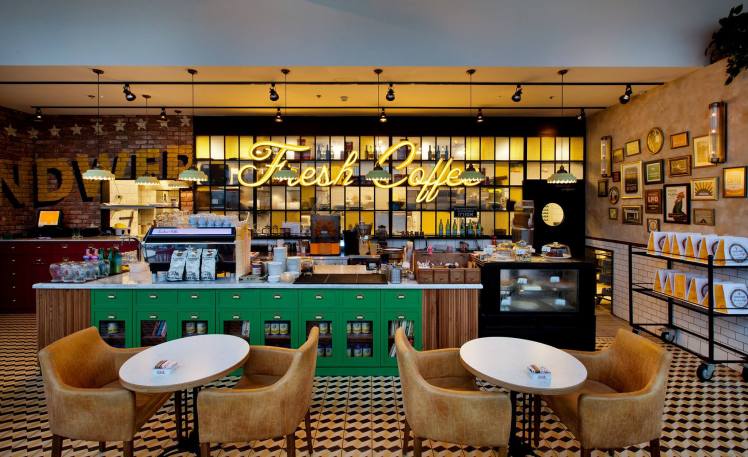 Cafe Joe, much like Landwer, offers a mixture of quality coffee with a rich food menu, from breakfasts to warm meals, pastries, salads, smoothies, and what not. The only reason I have placed Landwer higher on my list, is the fact that Joe has no almond milk. It is, however, important to note that Joe’s coffee is probably stronger and better than Landwer’s. And here too you will be able to find many delicious vegan options.

Joe has fewer branches in Tel-Aviv than Aroma or Landwer, but you will still be able to find it around the city and outside of it. Joe also sells coffee at gas stations. Each location (gas stations not included) has a different decor, inspired by a different part of the world. In these locations you will get full service, which means you can grab a seat, order and relax. My favorite dish is their quinoa mushroom (vegan) salad, but I would also recommend their vegan breakfasts, which are good.

Note that most of Joe’s locations are actually Kosher, which effects both the menu and their opening hours (closes early on Fridays and closed altogether on Saturdays). 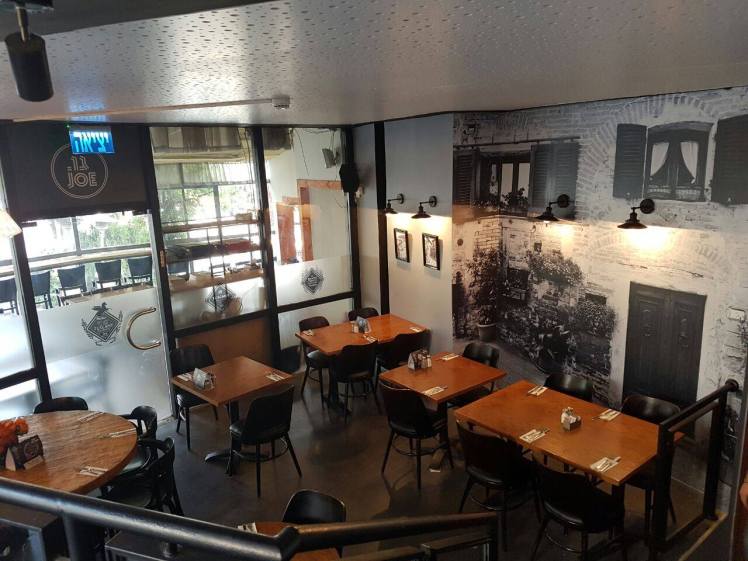 Arcaffe started out as artisinal, high end coffee. Unlike most coffee shops in Israel, the food selection was limited and the focus was on the beverages. Here you could (and still can) get snacks to go. However, as the chain expanded, years went by, and independent coffee shops started to open, Arcaffe lost it’s previous glory. Last year the chain tried to restore its prestige by opening a new roastery in Tel-Aviv.

I find Arcaffe’s coffee pretty strong and of good quality. Probably the chain with the best coffee in Israel. Moreover, Arcaffe’s bakery is good – breads, cakes and pastries. Arcaffe’s food isn’t really their highlight, though in recent years they have added many options to their menu, such as pizzas, pastas and hamburgers. However, if you are looking for a proper meal, you should probably skip this place.

Arcaffe has fewer location than Aroma, and probably is smaller than Landwer as well. Most locations have a pretty modern-industrial feel to them, and it’s not the coziest of places. I would recommend grabbing a coffee rather than actually hanging out there. 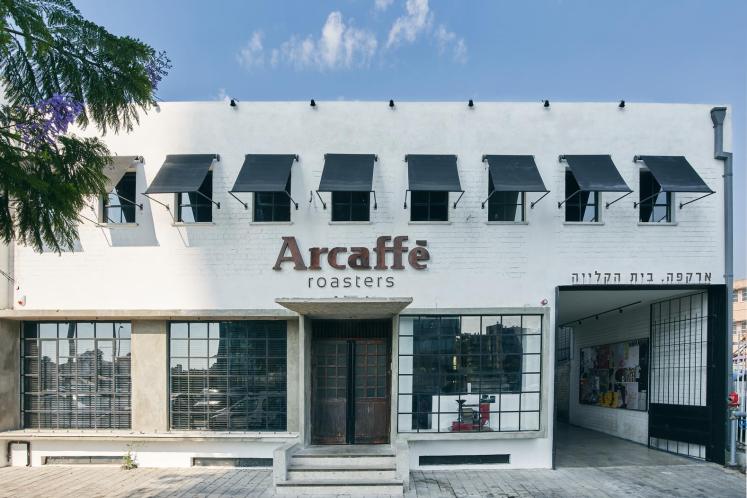 Where ever you choose to go, I hope you’ll enjoy your coffee!