I’ve been a vegetarian for the past 7 or 8 years. I was never a big fan of meat, but I kept eating poultry from time to time, as it’s supposedly healthy for you. Then I read Jonathan Safran Foer’s “Eating Animals”, and that was basically the end of that. Since I also have lactose intolerance, it was a pretty short road to becoming a vegan. However, I find it very hard socially, and very extreme (as I don’t want to be that difficult person who has nothing to eat) to really be vegan. So I’ve made a compromise and I eat a 75%-80% vegan diet. At home everything I buy and make is vegan, but when I go out I eat some dairy and eggs too.

I believe that when it comes to ideologies people should really make their own choices, and I would never try to pressure anyone to follow mine, but if you happen to be vegan, or simply like vegan food, I am always in search for the best vegan places in NYC, so today I’m going to share with you what I’ve learned, (including both the does and the don’ts).

I stumbled upon By Chloe accidentally when I was strolling in the West Village two and a half years ago, it was a new and trendy place, and probably had only one location at the time. I saw people waiting in line and I decided to see what was all the fuss about. I discovered a super cute place serving all vegan food, and was really happy. I tried a vegan burger and loved it, so I invited my friends, and came back for more. Since my first visit there, By Chloe has opened a few more locations, including one in Williamsburg, and also a separate “Sweets” place near the original restaurant, which is still my favorite. Since then, I’ve also discovered By Chloe have a great quinoa taco salad, a vegan BBQ sandwich to die for, and pretty awesome vegan ice cream. Bear in mind that during lunch and dinner time they are usually packed (all locations). 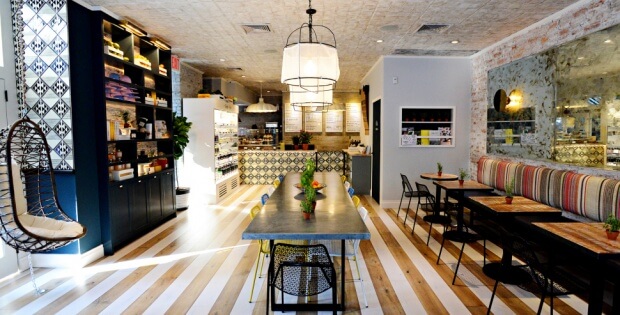 [Photo via @By Chloe]

This place is actually a vegetarian place, but I decided to include it in this post as it has a lot of vegan options and substitutions. The Butcher’s Daughter is a hot place these days, and if you ask  me, it’s for a good reason. With two locations in Manhattan, this cafe has managed to create spaces with a vibrant, young, light atmosphere. Both location are decorated with an impressive bar, hanging plants, and a very green decor in general, as well as outdoors seating. Their products are fresh, with a lot of vegetable based dishes, some of which are innovative, and have perfected every detail. My favorite is the tacos verde (a quinoa tortilla). The downside of this place is the fact that they are always full, pretty expensive, and their almond milk lattes aren’t good (they make their own almond milk, and when I tried it in my coffee it was pretty bad, so I ended up never trying their coffee again).

A Mexican vegan restaurant in lower Manhattan , with one of the most beautiful interiors in the city. It has a light and somewhat general South American atmosphere, decorated with cool tiles, hanging plans and a very photogenic urban decay vibe. Everything I had there was fine, but nothing was amazing. But the prices are very reasonable, and the place itself is just fun and vibrant (and super instagramable).

With several locations in Brooklyn and one in Manhattan, this is probably my favorite Asian restaurant. Their menu is the richest I’ve ever seen, to the point that a person like me, who has a hard time making decisions, just gets lots. However, almost everything I’ve had there was just really good. The Williamsburg location has a casual nice feel to it, it’s a great place to just walk in with some friends and grab a good meal.

Located in Bed-Stuy, Brooklyn, this bakery, or cafe, if you wish, is a perfect spot for a vegan breakfast, a snack, or a productive work session (either on your computer, or with your colleagues). They have an amazing variety of cakes, cookies, pastries, cupcakes (and more) as well as actual food. My personal favorite is their peanut butter and jelly bar. This is a neighborly and friendly spot, simply but greenly decorated. And just in case my enthusiasm went unnoticed, I’ll point out that this truly is one of my favorite spots in New York. (I will note that on the weekends they have a no laptop policy, as the place gets real crowded.) 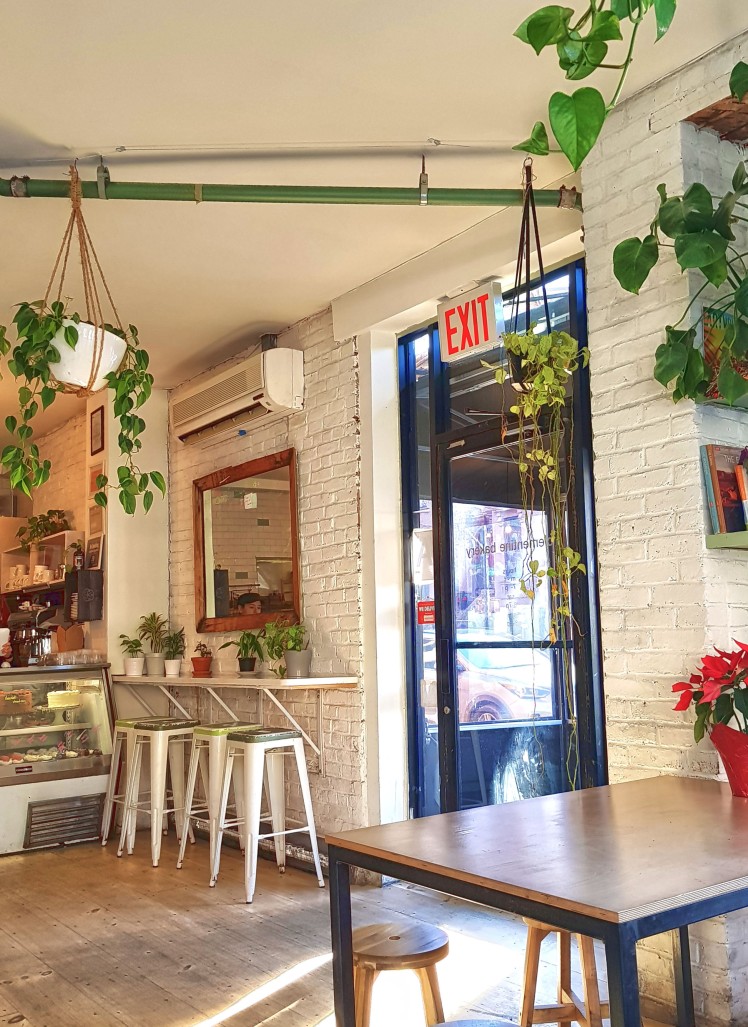 Two places I was less impressed by were Sun in Bloom and Blossom du Jour. The main problem I had with Sun in Bloom is that the food was pretty bland, and just not that good. In Blossom du Jour the food was fine, but it felt like a fast food joint to me, and I guess I was looking for something with a cozier atmosphere. Anyway, I don’t like reviewing places I didn’t like very much, but I will say I never returned to either of these.

Hope you found some of my tips useful!